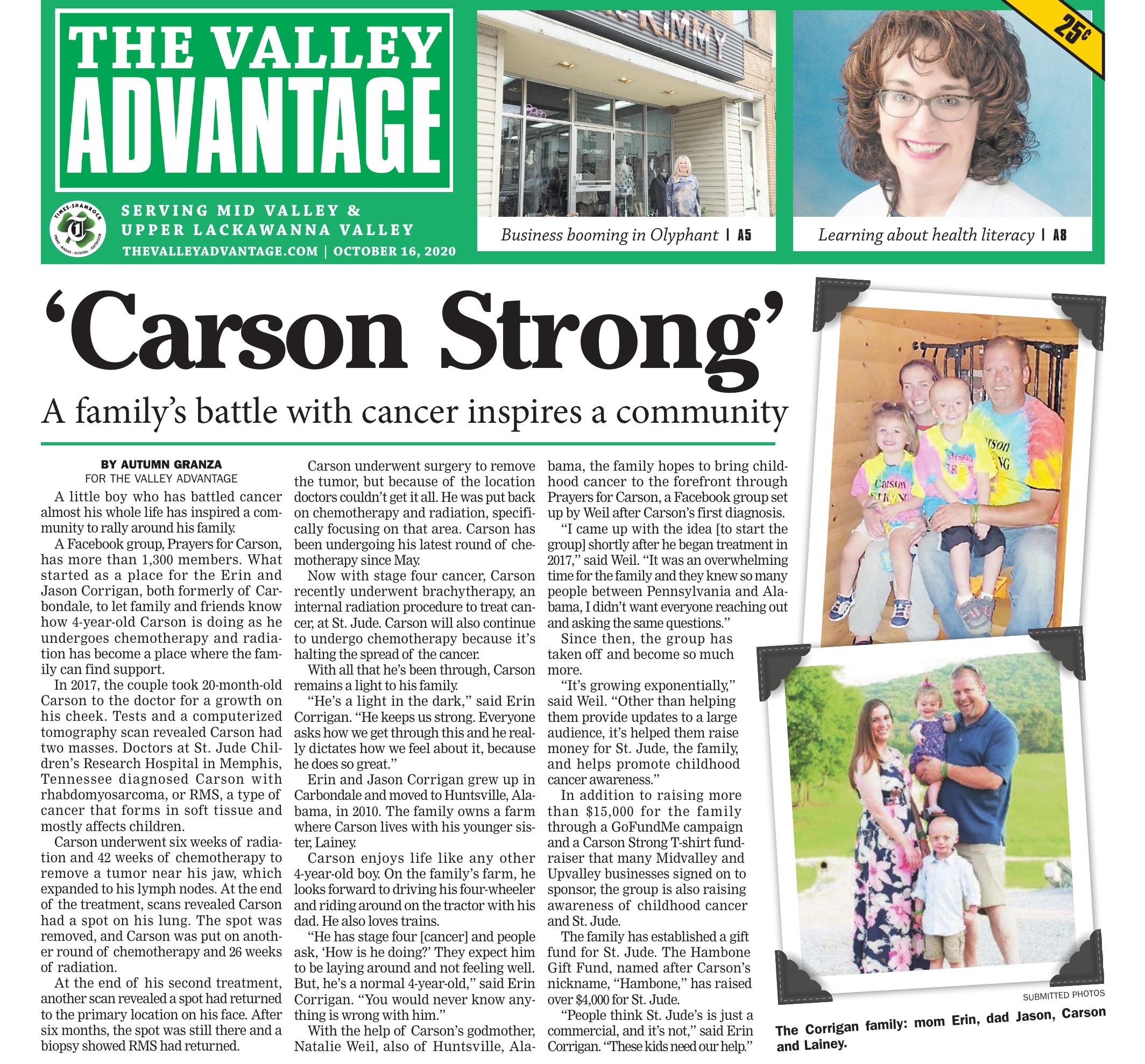 Business booming in Olyphant | A5

A little boy who has battled cancer almost his whole life has inspired a community to rally around his family.

A Facebook group, Prayers for Carson, has more than 1,300 members. What started as a place for the Erin and Jason Corrigan, both formerly of Carbondale, to let family and friends know how 4-year-old Carson is doing as he undergoes chemotherapy and radiation has become a place where the family can find support.

In 2017, the couple took 20-month-old Carson to the doctor for a growth on his cheek. Tests and a computerized tomography scan revealed Carson had two masses. Doctors at St. Jude Children’s Research Hospital in Memphis, Tennessee diagnosed Carson with rhabdomyosarcoma, or RMS, a type of cancer that forms in soft tissue and mostly affects children.

At the end of his second treatment, another scan revealed a spot had returned to the primary location on his face. After six months, the spot was still there and a biopsy showed RMS had returned.

Carson underwent surgery to remove the tumor, but because of the location doctors couldn’t get it all. He was put back on chemotherapy and radiation, specifically focusing on that area. Carson has been undergoing his latest round of chemotherapy since May.

With all that he’s been through, Carson remains a light to his family.

“He’s a light in the dark,” said Erin Corrigan. “He keeps us strong. Everyone asks how we get through this and he really dictates how we feel about it, because he does so great.”

Erin and Jason Corrigan grew up in Carbondale and moved to Huntsville, Alabama, in 2010. The family owns a farm where Carson lives with his younger sister, Lainey.

Carson enjoys life like any other 4-year-old boy. On the family’s farm, he looks forward to driving his four-wheeler and riding around on the tractor with his dad. He also loves trains.

“He has stage four [cancer] and people ask, ‘How is he doing?’ They expect him to be laying around and not feeling well. But, he’s a normal 4-year-old,” said Erin Corrigan. “You would never know anything is wrong with him.”

With the help of Carson’s godmother, Natalie Weil, also of Huntsville, Alabama, the family hopes to bring childhood cancer to the forefront through Prayers for Carson, a Facebook group set up by Weil after Carson’s first diagnosis.

“I came up with the idea [to start the group] shortly after he began treatment in 2017,” said Weil. “It was an overwhelming time for the family and they knew so many people between Pennsylvania and Alabama, I didn’t want everyone reaching out and asking the same questions.”

Since then, the group has taken off and become so much more.

In addition to raising more than $15,000 for the family through a GoFundMe campaign and a Carson Strong T-shirt fundraiser that many Midvalley and Upvalley businesses signed on to sponsor, the group is also raising awareness of childhood cancer and St. Jude.

The family has established a gift fund for St. Jude. The Hambone Gift Fund, named after Carson’s nickname, “Hambone,” has raised over $4,000 for St. Jude.

“People think St. Jude’s is just a commercial, and it’s not,” said Erin Corrigan. “These kids need our help.”

Learning about health literacy | A8