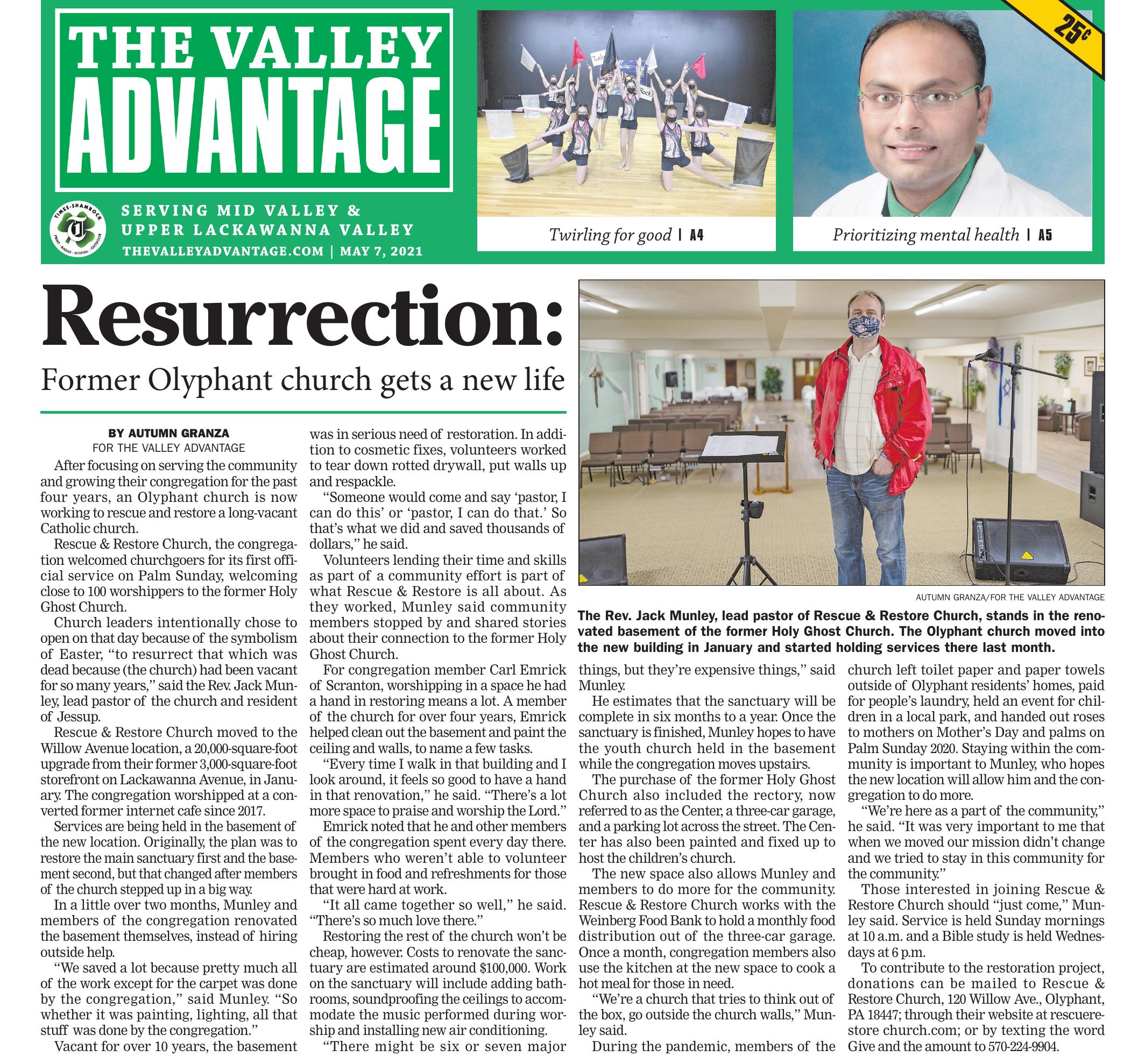 Twirling for good | A4

The Rev. Jack Munley, lead pastor of Rescue & Restore Church, stands in the renovated basement of the former Holy Ghost Church. The Olyphant church moved into the new building in January and started holding services there last month.

After focusing on serving the community and growing their congregation for the past four years, an Olyphant church is now working to rescue and restore a long-vacant Catholic church.

Church leaders intentionally chose to open on that day because of the symbolism of Easter, “to resurrect that which was dead because (the church) had been vacant for so many years,” said the Rev. Jack Munley, lead pastor of the church and resident of Jessup.

Rescue & Restore Church moved to the Willow Avenue location, a 20,000-square-foot upgrade from their former 3,000-square-foot storefront on Lackawanna Avenue, in January. The congregation worshipped at a converted former internet cafe since 2017.

Services are being held in the basement of the new location. Originally, the plan was to restore the main sanctuary first and the basement second, but that changed after members of the church stepped up in a big way.

In a little over two months, Munley and members of the congregation renovated the basement themselves, instead of hiring outside help.

Vacant for over 10 years, the basement was in serious need of restoration. In addition to cosmetic fixes, volunteers worked to tear down rotted drywall, put walls up and respackle.

Volunteers lending their time and skills as part of a community effort is part of what Rescue & Restore is all about. As they worked, Munley said community members stopped by and shared stories about their connection to the former Holy Ghost Church.

For congregation member Carl Emrick of Scranton, worshipping in a space he had a hand in restoring means a lot. A member of the church for over four years, Emrick helped clean out the basement and paint the ceiling and walls, to name a few tasks.

“Every time I walk in that building and I look around, it feels so good to have a hand in that renovation,” he said. “There’s a lot more space to praise and worship the Lord.”

Emrick noted that he and other members of the congregation spent every day there. Members who weren’t able to volunteer brought in food and refreshments for those that were hard at work.

“It all came together so well,” he said. “There’s so much love there.”

Restoring the rest of the church won’t be cheap, however. Costs to renovate the sanctuary are estimated around $100,000. Work on the sanctuary will include adding bathrooms, soundproofing the ceilings to accommodate the music performed during worship and installing new air conditioning.

“There might be six or seven major things, but they’re expensive things,” said Munley.

He estimates that the sanctuary will be complete in six months to a year. Once the sanctuary is finished, Munley hopes to have the youth church held in the basement while the congregation moves upstairs.

The purchase of the former Holy Ghost Church also included the rectory, now referred to as the Center, a three-car garage, and a parking lot across the street. The Center has also been painted and fixed up to host the children’s church.

The new space also allows Munley and members to do more for the community. Rescue & Restore Church works with the Weinberg Food Bank to hold a monthly food distribution out of the three-car garage. Once a month, congregation members also use the kitchen at the new space to cook a hot meal for those in need.

“We’re a church that tries to think out of the box, go outside the church walls,” Munley said.

During the pandemic, members of the church left toilet paper and paper towels outside of Olyphant residents’ homes, paid for people’s laundry, held an event for children in a local park, and handed out roses to mothers on Mother’s Day and palms on Palm Sunday 2020. Staying within the community is important to Munley, who hopes the new location will allow him and the congregation to do more.

“We’re here as a part of the community,” he said. “It was very important to me that when we moved our mission didn’t change and we tried to stay in this community for the community.”

Those interested in joining Rescue & Restore Church should “just come,” Munley said. Service is held Sunday mornings at 10 a.m. and a Bible study is held Wednesdays at 6 p.m.

To contribute to the restoration project, donations can be mailed to Rescue & Restore Church, 120 Willow Ave., Olyphant, PA 18447; through their website at rescuerestore church.com; or by texting the word Give and the amount to 570-224-9904.

Click and hold your mouse button on the page to select the area you wish to save or print. You can click and drag the clipping box to move it or click and drag in the bottom right corner to resize it. When you're happy with your selection, click the checkmark icon next to the clipping area to continue.