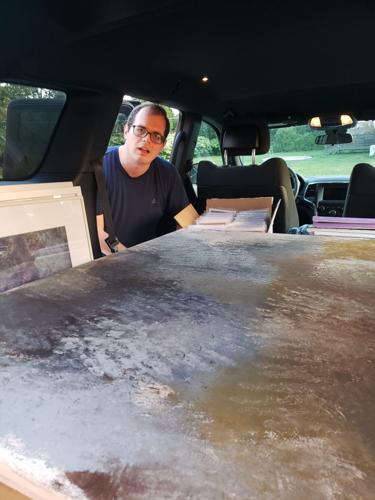 Tommy Hennigan packing the car with his paintings for display at ArtWorks for his September exhibit. 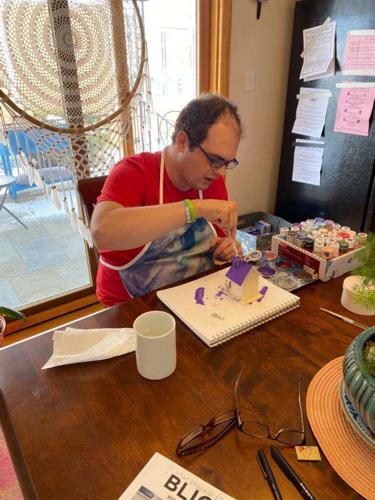 Tommy Hennigan working on a painting. The Dunmore artist has been painting since 2016.

Tommy Hennigan packing the car with his paintings for display at ArtWorks for his September exhibit.

Tommy Hennigan working on a painting. The Dunmore artist has been painting since 2016.

Unable to express his feelings through words, Tommy Hennigan turns to art.

The 34-year-old Dunmore native was diagnosed with a severe form of autism in 1990. He is non-verbal and began art therapy at Artworks in Scranton in September of 2016 after his music therapy classes abruptly stopped.

ArtWorks Gallery and Studio is a fully licensed day program for individuals with intellectual disabilities and autism, according to their website.

“His first piece of art was Sedona,” explained Eve Hennigan, Tommy’s mother. The piece uses warm earth tones that mimic the colors in the Arizona desert. “He was given a palette knife, acrylics and a canvas and created Sedona within an hour. He took up the tools as if he knew what he was doing.”

Tommy Hennigan primarily works with acrylics — painting smooth, bold arrays of color-blending. His work reflects his emotions. He is always smiling, his mother said, and that happiness can be seen in the bright colors he uses in his paintings.

When his father died, Tommy Hennigan mourned his loss through his art. His paintings became dark.

“I felt it was his way of communicating his grief,” said Eve Hennigan.

Tommy Hennigan’s art has grown since he first picked up a paint brush six years ago. He now has hundreds of paintings in his collection and has displayed his work numerous times at ArtWorks in Scranton and the Wonderstone Gallery in Dunmore. His paintings can be found across the United States, with purchasers hailing from as far away as California, Louisiana and Massachusetts.

But in March of 2020, the COVID-19 pandemic put his recreational activities on pause, including art therapy. Eve Hennigan gave her son a space to create during this difficult time, transforming a portion of their garage into an art studio where he was able to paint with Colleen Germain, his former art instructor.

“It was wonderful,” Germain said of her time working with Tommy Hennigan during the pandemic. “We had so much fun together. I learned so much from him. Since he is non-verbal, I learned how to enjoy the quiet time, too. I am an artist myself, and working with Tommy has helped impact the way I think about art and my own practice.”

During COVID, the two also created dream catchers, another form of art. Germain describes the process as a “team effort” and their creations were sold at the Wonderstone Gallery.

Also during this time, Tommy’s Voice was born. The nonprofit seeks to provide recreational activities, share resources and raise awareness for individuals with autism and other disabilities. Proceeds from Tommy Hennigan’s art support the Tommy’s Voice mission.

“We want to make sure people have a resource in the area so they know that art is an option,” said Germain, also a writer and founding board member for Tommy’s Voice. “It’s about awareness.”

Eve Hennigan echoes Germain’s sentiment. “It’s all about working together.”

Outside of art, Tommy enjoys traveling and loves to bowl with his friends in the ARC, Deutsch Institute and Parents Loving Children Through Autism bowling leagues.

“I am just so proud of him,” said Eve Hennigan. “I think what really makes me happy is that other parents look up to him and it gives them confidence in their kids. We need to stop looking at autism as a disability. This community is very special.”