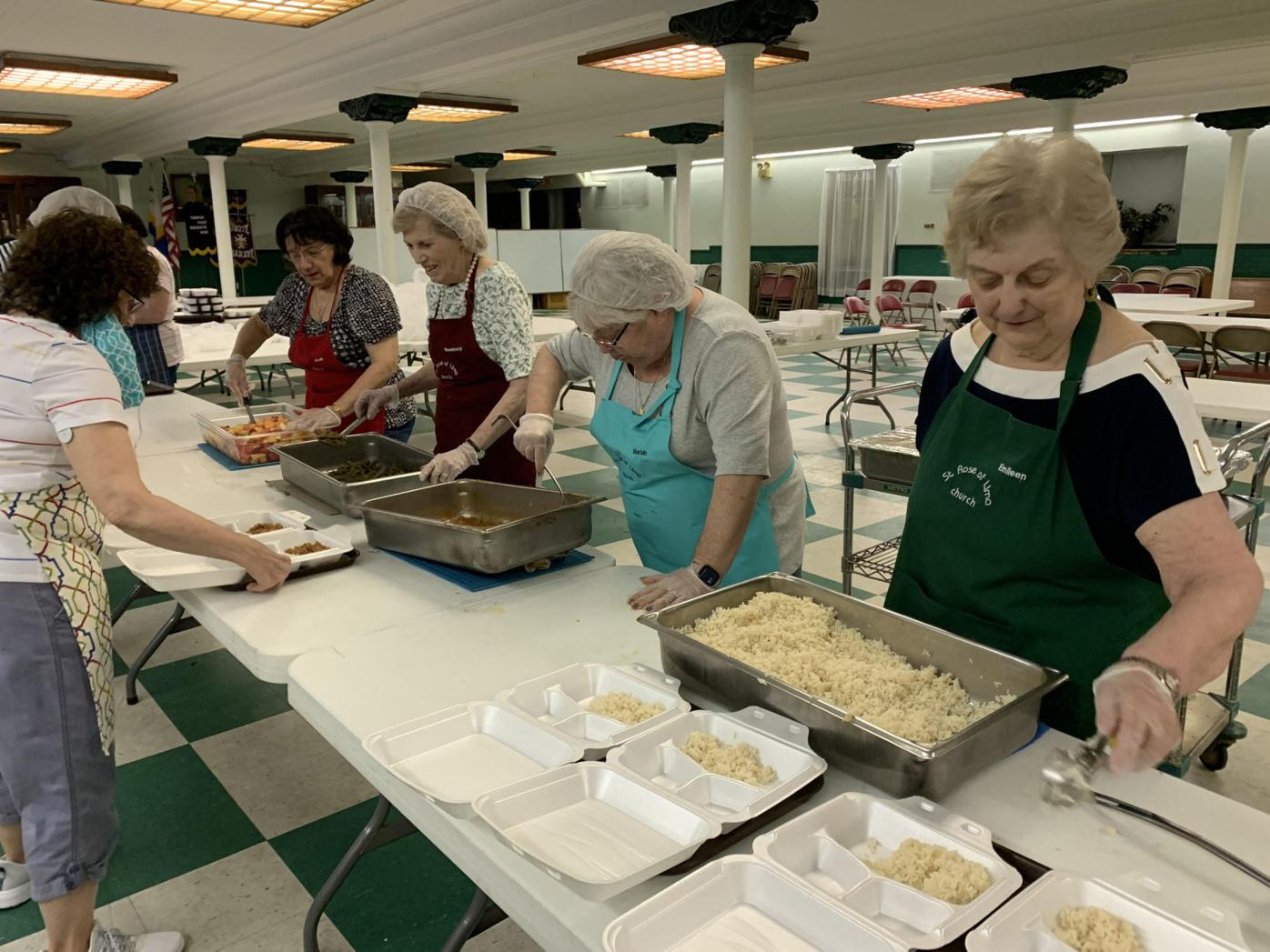 Above: From left, Carol Fagan, Joan Warhola, Rosemary Coleman, Cindy Opalka and Mary Monahan pack meals for residents of the Ben Franklin and Northern and Southern High Rises in Carbondale. 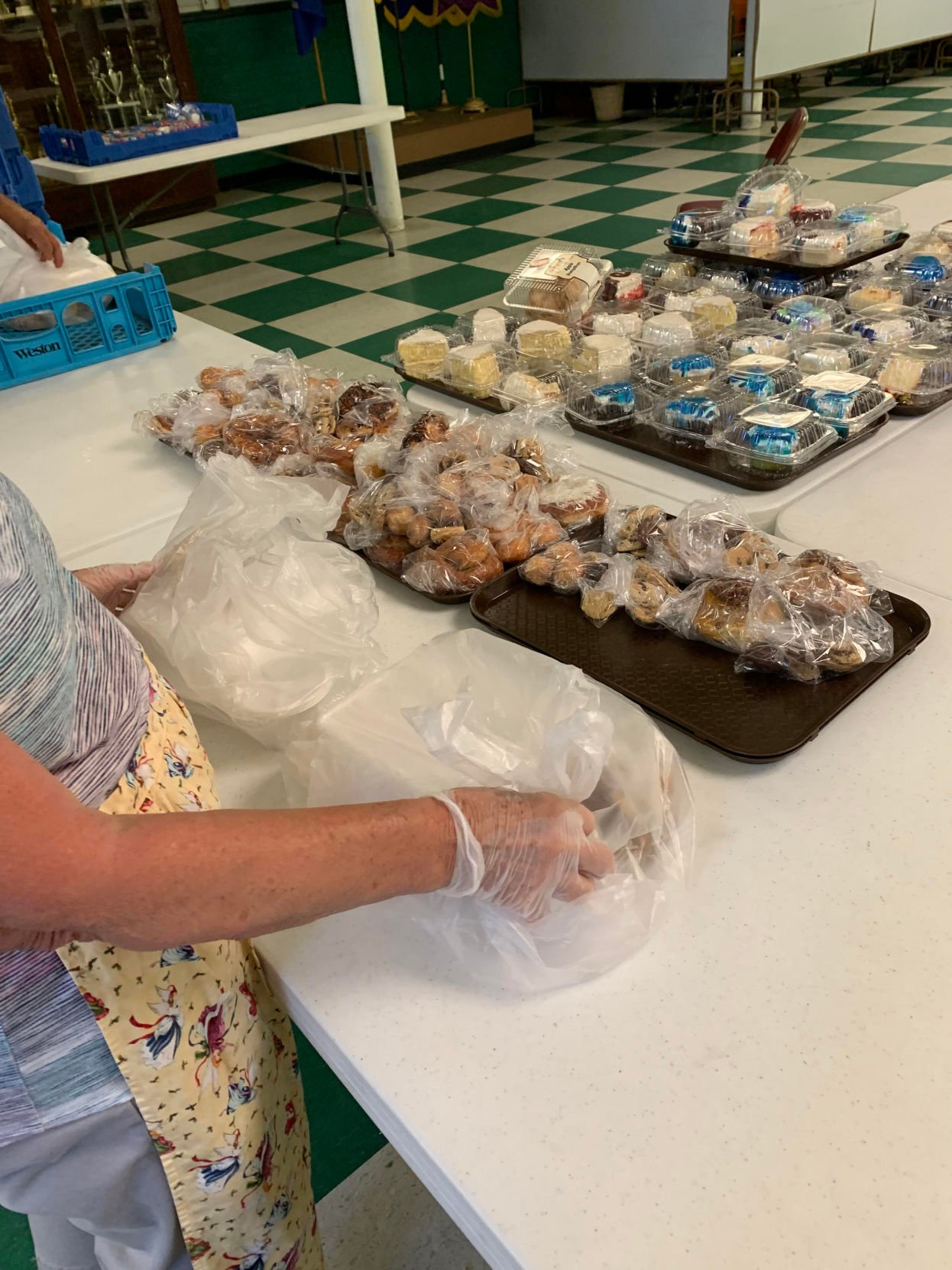 At left: A volunteer packs desserts for meals being delivered.

Above: From left, Carol Fagan, Joan Warhola, Rosemary Coleman, Cindy Opalka and Mary Monahan pack meals for residents of the Ben Franklin and Northern and Southern High Rises in Carbondale.

At left: A volunteer packs desserts for meals being delivered.

After a pause because of the COVID-19 pandemic, a free meal program that serves the Midvalley and Upvalley has resumed.

St. Rose of Lima Parish in Carbondale, with the help of the St. Francis of Assisi Kitchen in Scranton, began providing a hot meal to whoever needs one in October 2015. Unfortunately, the pandemic halted the almost six-year tradition for nine months.

“They had to shut everything down. We had no family meal, nothing. We weren’t allowed to be open,” said Jim Roberts of Carbondale, who coordinates the meals.

Meals resumed in December, with safety precautions in place. Meals were to be packaged by volunteers and served as take-out meals at the St. Rose Church.

Rises and Ben Franklin Apartments, all in Carbondale.

The deliveries and the meal at St.

Rose are part of the Mid Valley Outreach Program, a St. Francis initiative. With

“We do the transportation and preparation of the meal (in Scranton) and send it here in bulk,” said Rob Williams, executive director for St. Francis.

The Olyphant meal is held from noon

The Archbald meal is expected to resume in September.

The ideas for the meals began six years ago, when officials at St. Francis contacted Father John O’Bell at St. Rose, hoping that St. Rose would sponsor the meal. O’Bell then contacted parishioners Mary Ann and Jim Roberts of Carbondale to coordinate the meal.

“We had a meeting and they asked

for volunteers. We met with Father O’Bell and explained what the officials at St.

Francis wanted and we agreed to it,” said Jim Roberts.

All together, 70 people volunteered to serve the meal at St. Rose. They were divided into teams of 12 to 14 people. Each team working once a month with some volunteers who worked each week.

“We [volunteers at St. Rose] called them, ‘the regulars’ who would be there every week because they wanted to be here,” said Jim Roberts.

With the success in Carbondale, St. Francis decided to extend the program to Archbald and Olyphant in 2016.

“It’s a great partnership between St. Francis Kitchen and these local communities. One of my favorite things about this outreach is that its local people serving local people,” said Williams.

Although the meals have returned after the pandemic pause, the number of volunteers have shrunk to 20.

“Those who were elderly or had dependent people in their homes were fearful. They didn’t want to catch anything and bring it home,” said Jim Roberts.

Before the pandemic, a sit-down meal, rather than the traditional cafeteria style was served at St. Rose. This was done intentionally to preserve the dignity of those receiving a meal.

“We believe that every single person who goes in or out of our doors has dignity and should be treated as such,” said Williams.

According to Jim Roberts, the meal attracted anywhere from 60 to 120 people each week of varying incomes and age groups. The meal has always been open to anyone who wants one, no questions asked.

“Whoever presents themselves, we give them a meal. We don’t ask any questions.

If they’re hungry, we give them a meal,” said Williams.

Jim Roberts and volunteer Cindy Opalka of Waymart both see the meal as more than a way to feed people. It’s also an opportunity to socialize.

“It was absolutely beautiful. The community was getting together socially. It was way more than a meal,” said Opalka.

Opalka has continued to volunteer since the program’s conception because she loves the people, and she feels she can best live Jesus’ mission.

“We do what Jesus wants us to do, which is feed the hungry and take care of the community. It’s not work either. We leave our families to come to another family. We’re all one family,” said Opalka.

For right now, the take-out option will continue, although Jim Roberts, Williams and Opalka are hopeful that a dine-in option will return.

“We’re looking forward to a time when there will be some faction of a sit-down.

We will continue the take-out though,”