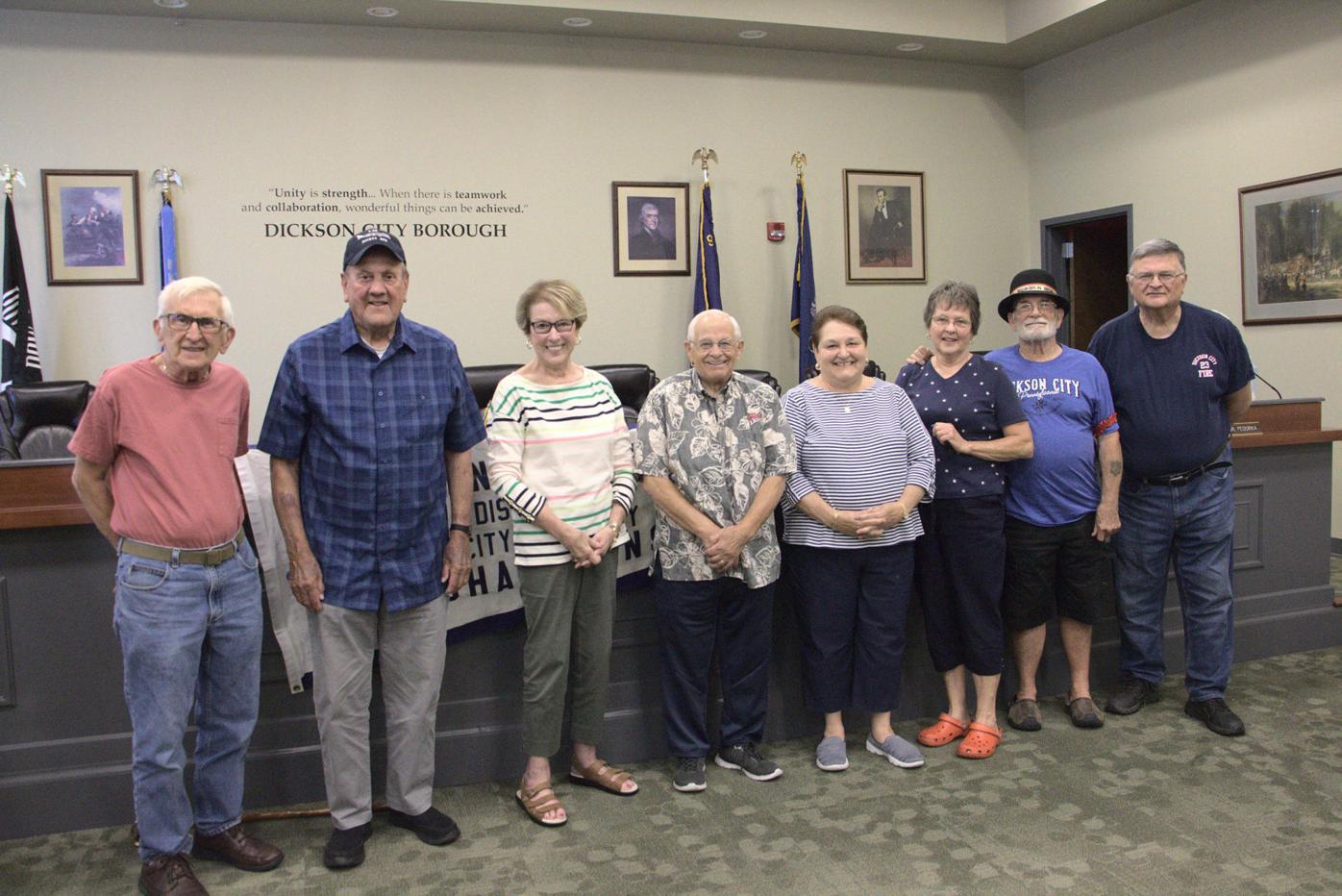 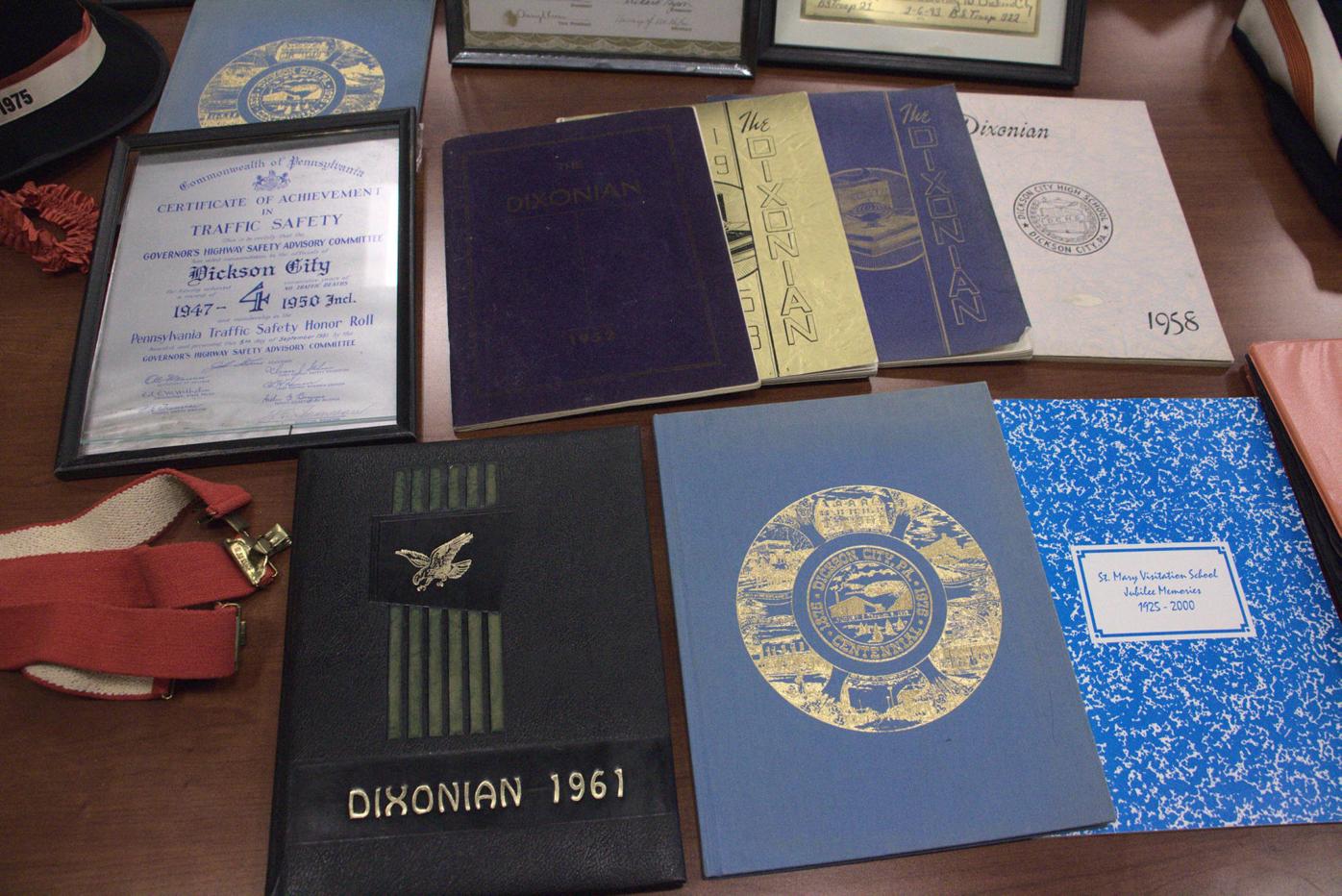 Items already collected by the historical committee include this assortment of old yearbooks from Dickson City High School, as well as a certificate of achievement in traffic safety.

Items already collected by the historical committee include this assortment of old yearbooks from Dickson City High School, as well as a certificate of achievement in traffic safety.

Residents and visitors of Dickson City will soon have a new reason to visit the borough’s Community Center.

The Dickson City Historical Committee is collecting artifacts from the local area’s history and plans to move them from a few displays in the borough building to public space in community center along Albert Street.

Borough Council member Jack Horvath started the Dickson City Historical Committee two years ago. A former history teacher at Mid Valley, Horvath became interested in the history of the area once he came across an old picture of his street, Carmalt Street.

He also noticed that the nearby borough of Olyphant was collecting local pieces from their community’s past, so he started the committee to do the same for Dickson City. Committee members include Mike and Carole Repecki, Myron Glodek, Joseph and Ann Marie Scinicariello, Gary and Roseann Bobrowsky and Georgia Adamitis.

Since the beginning of their project, the committee has collected a wide variety of historical artifacts, including old pictures of the city, uniforms, banners, documents and even coal mining equipment.

Horvath was surprised by how much the committee has collected so far. His personal favorites are their collection of old yearbooks from Dickson City High School. Adamitis, who also serves on borough council, is fascinated with the old uniform for the Dickson City Fire Department’s mascot.

The small, black police uniform with white buttons, similar to ones the officers wore at the time, was worn by former Police Chief James H. Oakey when he was only 6 years old, years before he became the top cop in the borough.

Some of their other pieces include pictures of school athletic teams from the early 1900s, old newspapers from the 1910s, commemorative hats and plates from the Dickson City centennial in 1975, tax documents from 1919, and even a pamphlet to celebrate community members who were returning to their hometown after World War II.

The committee is hoping to collect even more items and encourage the community to donate any artifacts they may have. Adamitis believes there are many people in the local area who are holding on to these treasures, but understands that they are reluctant to get rid of them.

“I feel like having them on display for everyone to see would be more meaningful than to keep them hidden away,” Adamitis said.

Dickson City’s formation and early history owes a lot to the boom of anthracite coal mining in the state of Pennsylvania. Its name comes from Thomas Dickson. He founded Dickson Manufacturing Company, which specialized in making iron rails for coal-powered trains in the Northeast Pennsylvania region.

As the town grew due to the success of the coal industry, the borough was chartered and named after Dickson. The borough’s coal mining heritage plays a key role in its development, so the Dickson City Historical Committee is desperately looking for more artifacts to memorialize its coal mining heritage.

The Dickson City Historical Committee’s vision is to display all of the artifacts they have gathered to the public inside the Community Center to show older generations how much life has changed over the years and to teach younger generations about what their hometown was like before they were born. They will happily accept any historical items from Dickson City’s past; all donors will be given credit in the display.