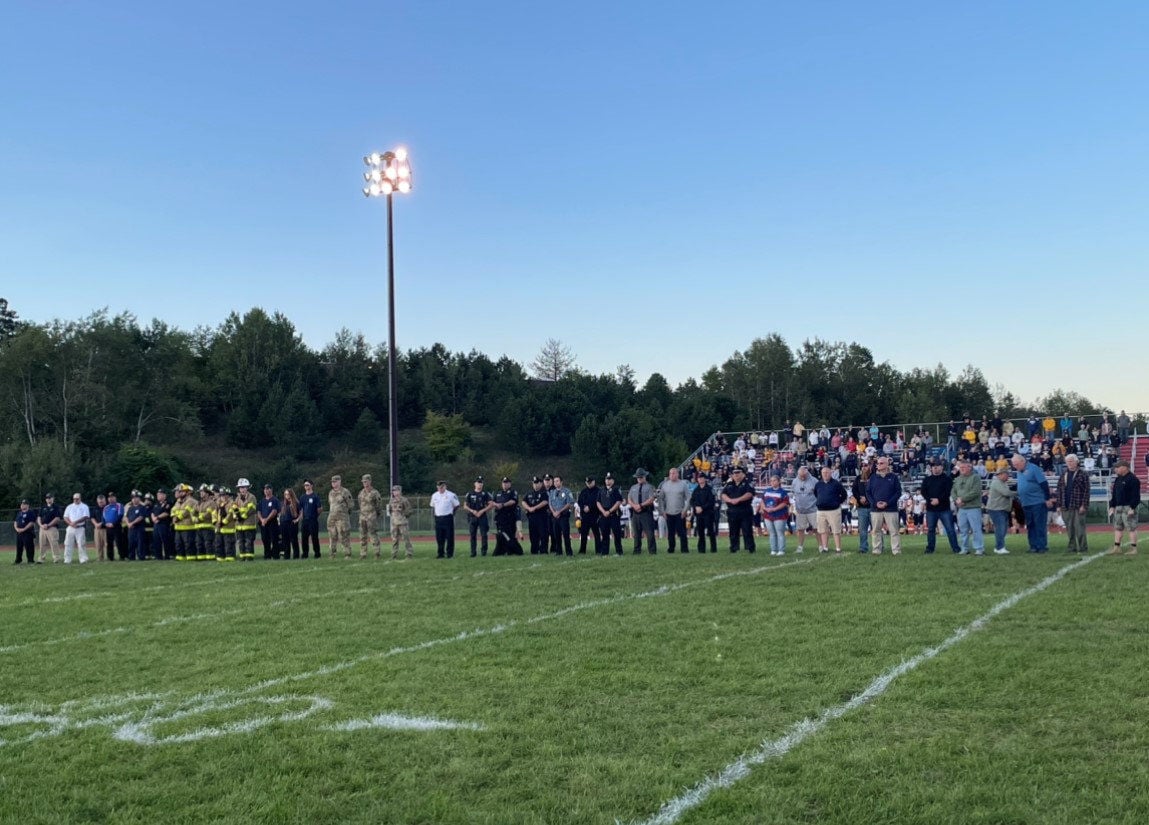 Local first responders, military personnel, veterans and police officers are honored prior to the Chargers home football game on Sept. 10 against Old Forge, in light of the 20th anniversary of the Sept. 11 terrorist attacks. 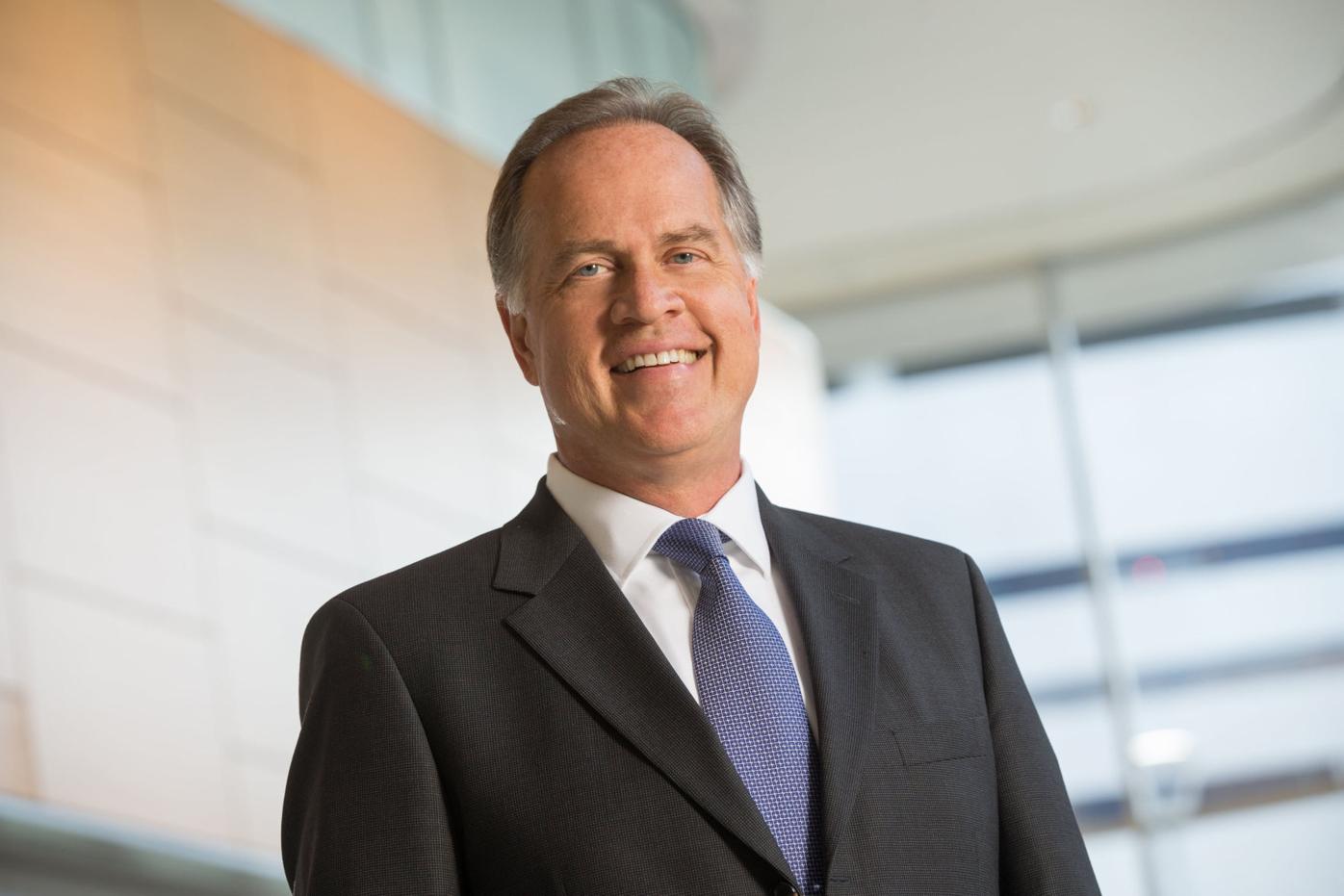 Before the Carbondale Chargers took the football field on Sept. 10 for a game against Old Forge, they paused to honor all first responders, military personnel, veterans and police officers.

In an event spearheaded by head coach Jeff Arthur, the football team walked onto the field, led by senior captain Liam Misko carrying the American flag. The Chargers wore the Pennsylvania Army National Guard camouflage uniforms in honor of the brave men and women who sacrificed so much.

“Wearing the Pennsylvania National Guard camo jerseys was an honor to play in and to represent the men and women who fought for our country,” Liam said. “Carrying the American flag out on the field as our team followed behind me was an honor and a great feeling that I will never forget. I am proud to fly the symbol of this great country and play a sport that I love representing the men and women who sacrificed their lives for our freedoms.”

Military personnel, veterans, police officers and first responders in attendance also walked onto the field while a narrative about the events Of Sept. 11 was read, followed by a moment of silence for all who lost their lives. Bruce Gordon, a social studies teacher at the Carbondale Area High School, wrote the narrative.

Gordon served in the Pennsylvania Army National Guard and deployed during the war on terror, missing more than two years while serving overseas.

“These fine young athletes and the Carbondale community make me so proud to have worn our nation’s uniform,” Gordon said. “We solemnly honored the fallen so we will never forget the hometown heroes who gave their lives for the freedom and liberty we hold so dear as Americans.”

Catholic Social Services of the Diocese of Scranton is continuing its outreach to the community during the COVID-19 pandemic.

A free food distribution event will be held on Wednesday, Sept. 29 from 2 – 4 p.m. at the Catholic Social Services Carbondale Office, 34 River Street. No pre-registration is necessary. Anyone in need is welcome to either drive up or walk up for assistance.

Catholic Social Services and the United Methodist Church in Carbondale are sponsoring this event.

During the most recent special food distribution in Carbondale, held on Aug. 26, 122 children, 246 adults and 162 seniors received assistance.

Star running back to join local hall of fame

Alex Dubee, star running back of the 1967 Suburban League Champion Archbald Rams, will be inducted into the Archbald Athletic Hall of Fame on Oct. 16.

The ceremony will take place starting at 3 p.m. at Kenny’s Pub, 153 Spruce St. Archbald. The event will be held along with the annual spaghetti and meatball dinner of the Archbald Notre Dame Club in honor of Pat Mullen.

Dubee was twice named as the Times-Tribune Athlete of the Week, a unanimous choice for league all star and back of the year. Mike Rogan, team quarterback, will introduce his friend and teammate. Dinners are $14 and can be obtained at the door or by calling Pat Munley at 570-876-5539.

Jermyn gearing up for Sesquicentennial

After a delay because of the COVID-19 pandemic, the borough of Jermyn is preparing for their

While plans for a five-day celebration were canceled last year, a sesquicentennial dinner will be held Oct. 9 at Saint Michael’s Center, Delaware Street.

The American Legion William J. Griffiths Post No. 465 Commander R. Fred Jones will present the colors with honor guards Crystal fireman Jeff Morcom and Artisan fireman Michael Ball. The National Anthem will be sung acapella by Abigail Chase, graduate of Lakeland High School and a volunteer Artisan firefighter. Innvocation will be given by the Rev. Allan Rupert, pastor of the Primitive Methodist Church and benediction given by the Very Rev. John Kowalczyk, pastor of Saint Michael’s Orthodox Church. Rupert and Kowalczyk are the longes-serving church pastors in Jermyn with over

Remarks to be presented by Mayor Anthony Fuga, Council President Frank Kulick, and Sesquicentennial Chair Bruce Smallacome. Jermyn’s senior resident, Helen Tomaine, will be honored as well. She will be 100 years old.

The dinner will also feature multiple speakers talking about their pride in the many accomplishments and memories of their beloved town’s people, businesses, sports and churches. Topping the celebration off is the Jeffrey James Band.

But the highlight of the dinner will be the guest speaker: Thomas F. Zenty III, a former borough resident. Son of the late Edna and Thomas F. Zenty Jr., the younger Thomas Zenty is a graduate of Lakeland High School and Penn State. He earned a masters from from Zavier University and an M.H.A. from New York University.

Recognizing the young man’s potential, a local physician invited Zenty to accompany him on hospital rounds. While the experience gave Tom an appreciation for the life of a physician and for patients, it also helped him discover his real interest, the business behind the medical care. He has pursued his vision with purpose and energy ever since, ultimately becoming one of the nation’s most respected leaders in health care.

He recently retired as CEO of University Hospitals, after a career that took him all over the country. In 2010, he was named to Modern Healthcare magazine’s list of the 100 Most Influential People in Health Care. In 2019, was honored by Forbes as their Best In State Large Employer in Ohio, one of America’s Best Large Employers, and one of America’s Best Employers for New Graduates.

Families who need a little help from Santa this year can contact The Salvation Army.

Email carbondalesalvationarmyunit@gmail.com by Oct. 5 with “Angel Tree” in the subject line. An intake worker will respond and provide further information. If you have received gifts through this program for the past five consecutive years, you will be placed on a wait list.

The level of service provided will be dependent on the resources of the family unit and support received from the public in the Christmas campaign. Donations may be sent to The Salvation Army, PO Box 3094, White Mills, PA 18431. Specify Carbondale Christmas in the memo line of the check.

Applications are now available to be a vendor at the Lackawanna Winter Market Village, part of the Lackawanna County Winter Weekend event in downtown Scranton, on Dec. 3, 4 and 5 on Courthouse Square.

Vendors participating in the market will be provided a 10-foot by 10-foot zip-up tent with lighting. Everything will be spaced/appropriately distanced on the 200 block of North Washington Avenue for everyone’s safety.

Questions regarding the Lackawanna Winter Market Weekend should be directed to Maureen McGuigan, deputy director of arts and culture, at 570-496-1724 or mcguiganm@lackawannacounty.org.