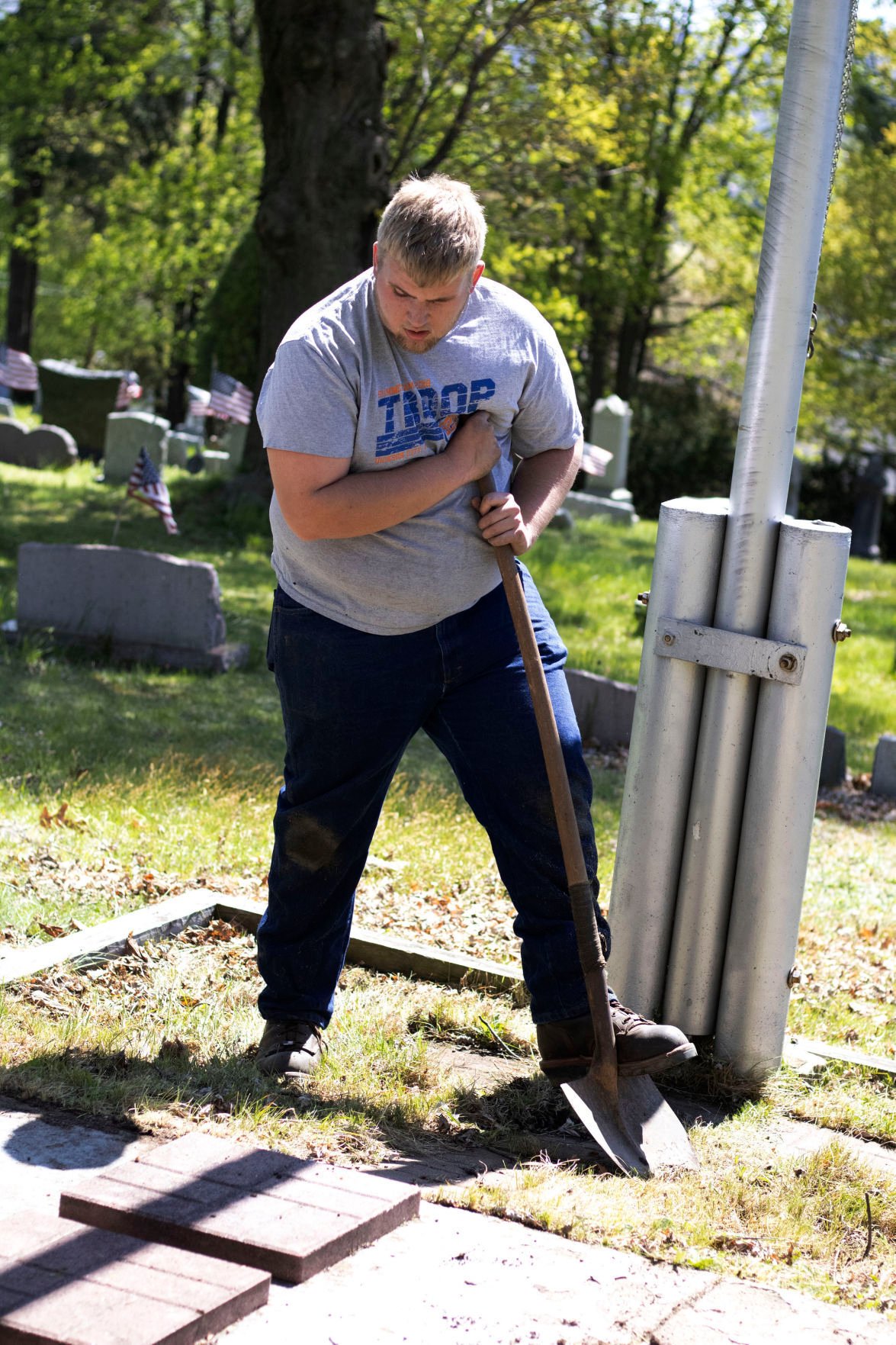 Wayne Jones digs up turf around the cemetery’s flagpole as part of his Eagle Scout project at First Primitive Methodist Church. 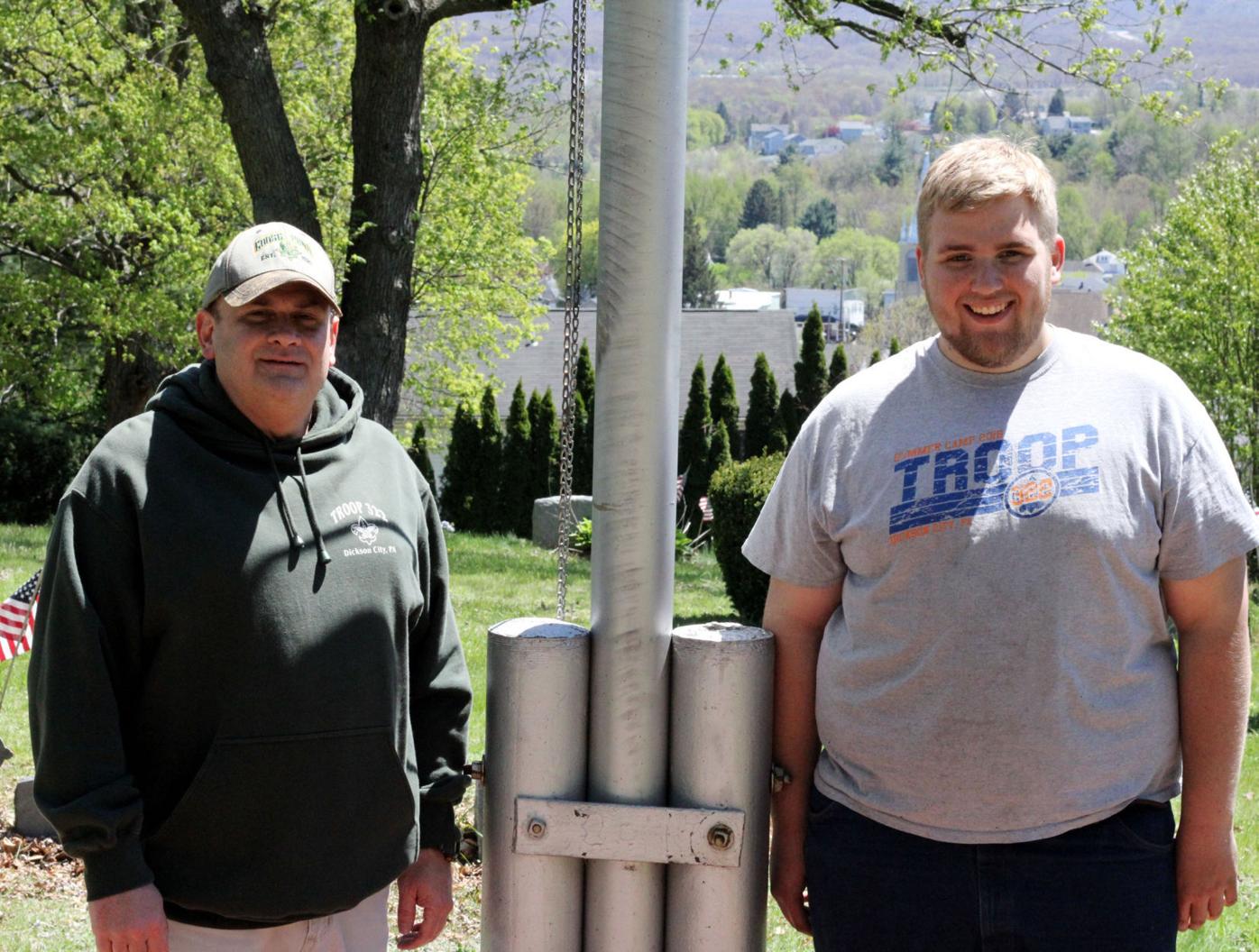 Troop 322’s Scoutmaster Frank Marcin and upcoming Eagle Scout Wayne Jones at the cemetery that Wayne and his troop cleaned up.

Wayne Jones digs up turf around the cemetery’s flagpole as part of his Eagle Scout project at First Primitive Methodist Church.

Troop 322’s Scoutmaster Frank Marcin and upcoming Eagle Scout Wayne Jones at the cemetery that Wayne and his troop cleaned up.

From sanding peeling paint and scrubbing worn bricks to digging up old turf and spreading mulch, one local Boy Scout is putting in plenty of time and effort on his way to earning the highest honor in scouting.

Wayne Jones of Dickson City’s Boy Scout Troop 322 is sprucing up the cemetery of the First Primitive Methodist Church in the borough for his Eagle Scout Project. The project was a way of giving back to an institution and an individual that had given him so much throughout the years.

“The church has always been important in my life. I just wanted to do something to give back. My father always took care of the cemetery up there, and when he passed away, I took over,” said Wayne, adding that his father’s influence was one of his main reasons for joining the Boy Scouts.

Wayne first approached his Scoutmaster, Frank Marcin, about the project in the fall of 2020. Marcin has been proud of the work that he has seen from Wayne.

Although it was Jones’s Eagle Scout Project, he didn’t accomplish the work alone. He had the help of his friends in Troop 322, family members and members of the church.

Peeling red paint covered the walls of the cemetery’s equipment shed. Wayne and his troop sanded the doors, scraped the outside walls and covered the exterior of the shed in two coats of gray paint.

Wayne said that his favorite parts about the project were overseeing it and getting everything organized.

“It’s cool to see how it all comes together and how it looks at the end, like the flagpole and how the bushes are planted. I think that’s really neat,” he said.

Now that the work is done, Wayne will submit photos documenting the work that he put into it. He will go before a board of review to answer questions about scouting and the project. Jones hopes that he will become an official Eagle Scout sometime this summer.

After he earns the rank of Eagle Scout, Wayne still wants to help his troop in any way that he can and wants to come back as a leader. He also hopes to attend Johnson College to study electrical construction.

“They have to complete the requirements before their 18th birthday and a lot of them wait and then they’re rushing to try to get things done before they turn 18. The idea is to do things in a timely fashion and to not procrastinate,” said Marcin.

Wayne added, “Don’t put off the project until the last minute and get all of your stuff in order. Especially if it’s an outdoor project, too.”