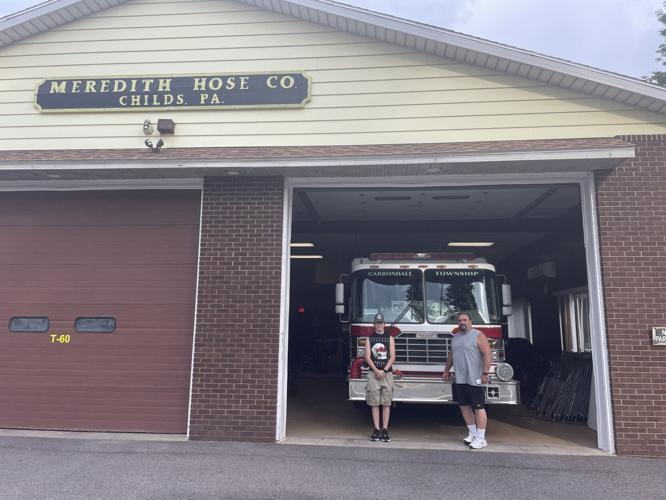 From left, Meredith Hose Company Junior Volunteer Carson Talarico and Chief Tony Aileo in front of one of the company’s trucks in the main garage. 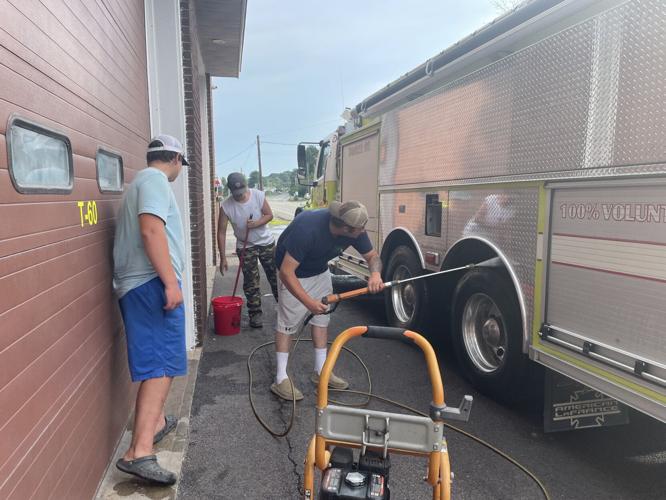 From left, Meredith Hose Co. volunteers Jake Sweeney, Grant Chase and Dj Wright wash one of the company’s trucks after a recent call.

From left, Meredith Hose Company Junior Volunteer Carson Talarico and Chief Tony Aileo in front of one of the company’s trucks in the main garage.

From left, Meredith Hose Co. volunteers Jake Sweeney, Grant Chase and Dj Wright wash one of the company’s trucks after a recent call.

Meredith Hose Company is looking to expand its station amidst an increase in development throughout the area.

Located at 100 Main St., Childs, the fully volunteer Meredith Hose Company has been serving the community since 1912.

Chief Tony Aileo, a volunteer for 34 years and chief for over a decade, said the company recently received a grant of $147,699 from the state to help pay for additions to the station — including a new garage to house its three fire trucks.

“We applied for a grant and eventually got one from state representatives and we were fortunate enough to receive it although we put in a little more, but we have a ton of local support from businesses who are helping us,” Aileo said. “The goal is to build a 50-foot by 70-foot four bay garage and later on put on a day room, showers and a washer and dryer area.”

Despite getting the large grant, the company will need to double the amount for the additions, the chief said. In addition to the garage, Aileo said that another truck may be necessary with a recent increase of call volume. The plans for the renovations also need county approval. Aileo said the plans will be presented to the county board in mid-August.

The need for additional space for the company’s equipment and resources is necessary as traffic on Business Route 6 increases, according to Aileo.

“Our call volume has gone up drastically over the past three years and there’s talk of some warehouses and more development,” Aileo said. “We are fortunate enough to have a great relationship with the neighboring department in Mayfield.”

Aileo said the renovations will not only relieve some of the pressure caused by the traffic, but will also help the company operate more efficiently.

“We want to put our fire trucks in the back there. It is inconvenient for us to get out onto Route 6,” Aileo said, adding that the planned addition of a Sheetz at Business Route 6 and Meredith Street will create more traffic, making it harder to get firetrucks onto the road quickly.

Aside from traffic concerns, the existing garage’s limits are being tested, according to Aileo. One of the company’s fire trucks barely fits into the facility, leaving about a foot between the vehicle and the wall.

In the 40 years he’s volunteered with Meredith Hose Company — named for Samuel Meredith, the first treasurer of the United States — John Davies has watched equipment and technology change.

“Back then we were extremely small and were operating with a little 1956 red truck in this tiny garage,” Davies said.

Acquiring firefighting equipment, including mini pump trucks to help bring water to areas without hydrants, helped the company become more efficient and effective over the years.

“We don’t just serve people in the vicinity of the station,” Davies said. “Carbondale is a massive area and we serve about 1,200 to 1,300 people who are spread very far apart across this area.”

Davies said that volunteers have a close community and volunteers vary from all different backgrounds and locations. The expansion project will help the fire company attract volunteers and give them more room to hold fundraisers.

“The best part of volunteering is definitely the calls,” Talarico said. “It’s exciting and fun but you’re also helping others too.”

On Aug. 28, the company will be hosting a summer chicken barbecue which offers a $12 chicken dinner consisting of chicken, potato, baked beans, roll and dessert. The fundraiser will operate from 1-4p.m. and all are welcome.

More information on the company’s events and fundraisers can be found at www.facebook.com/meredithhosecompany.