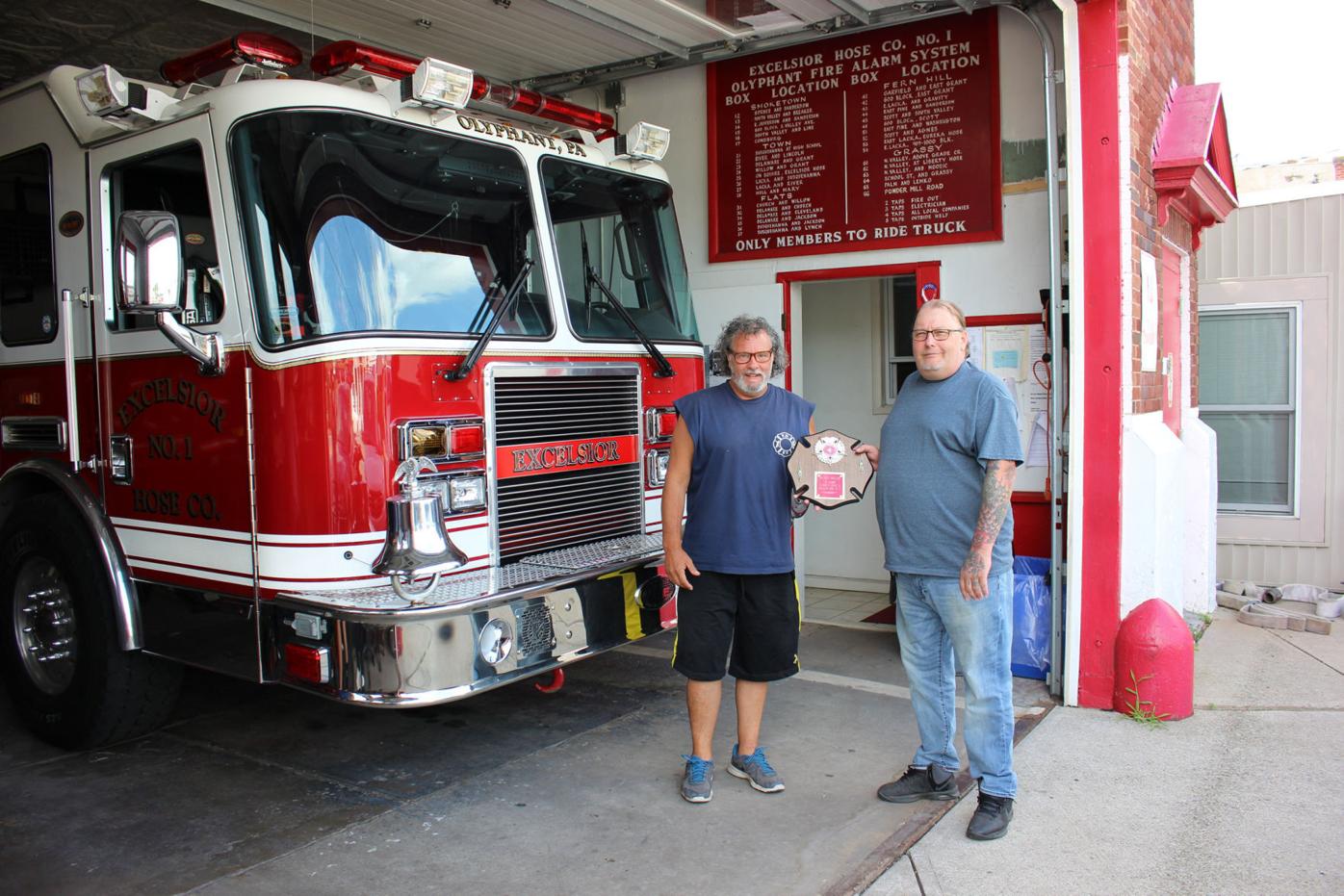 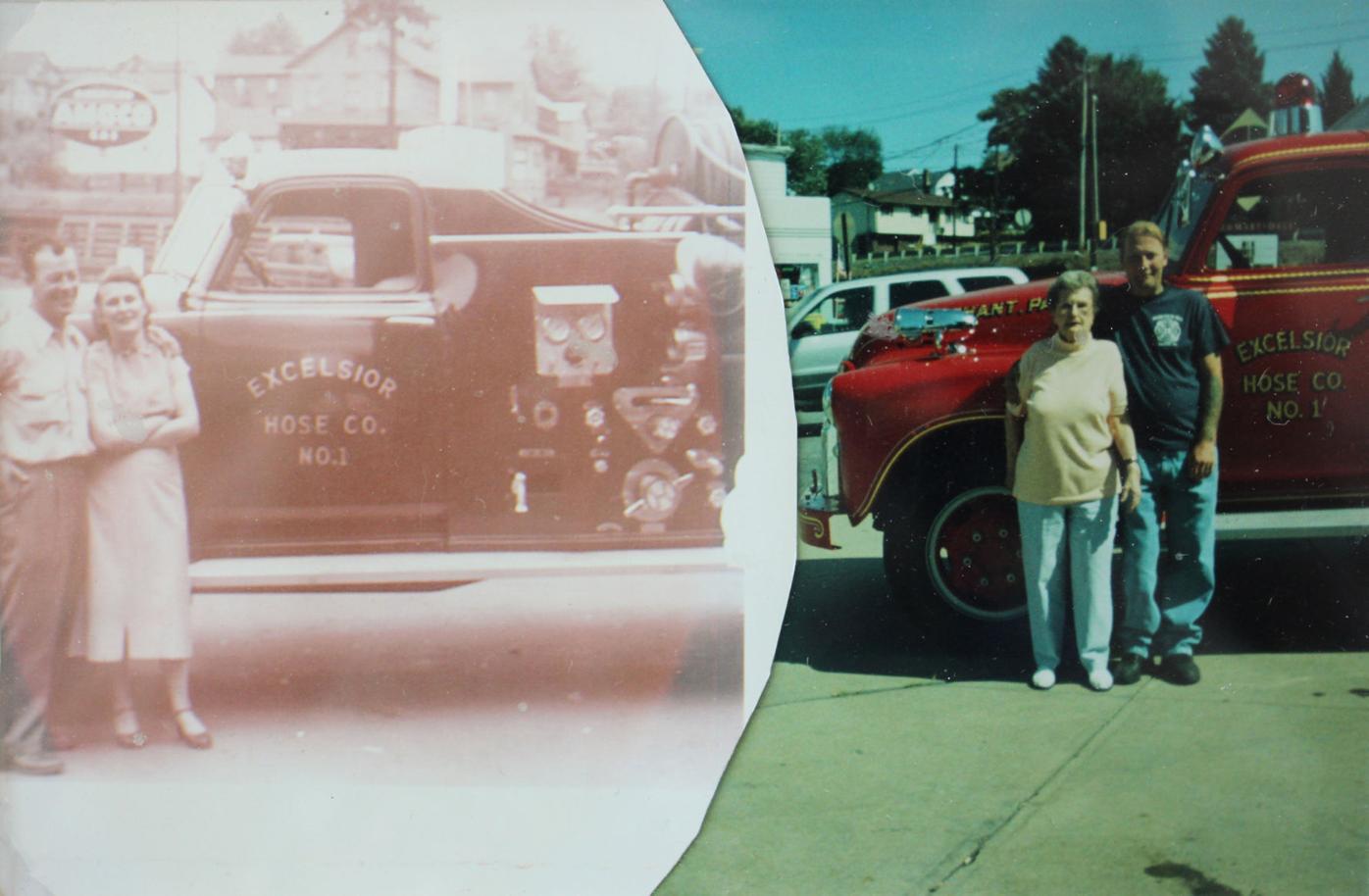 On left, George and Mary Nichols in 1952 with Olyphant’s Excelsior Hose Company’s GMC Bickle-Seagrave. On right, Mary Nichols with her grandson, Danny Willis, in 2002 in front of the same truck.

On left, George and Mary Nichols in 1952 with Olyphant’s Excelsior Hose Company’s GMC Bickle-Seagrave. On right, Mary Nichols with her grandson, Danny Willis, in 2002 in front of the same truck.

The fire station still operates in the same building since 1890 surrounded by reminders of its proud past. Firefighters who serve more than 20 years at the 130-year-old company are given a life member award.

Danny Willis received his last month, honoring a journey that began when he was 15, following in his grandfather’s footsteps.

Willis joined as a junior firefighter in Olyphant in 1980. He was trained by Ron Roberts and Harry “Skippy” Zeinski. The pair used their own money for training materials for the young men of Olyphant.

Forty years later, Willis is still serving. In addition to being a member of Excelsior Hose Company for the past 22 years, Willis has also served with Olyphant’s Hose Co. 2 and companies in Peckville and Jessup. He has held the rank of lieutenant, captain and assistant chief.

Willis grew up with Olyphant Borough Fire Chief Dave Tully. They recently reminisced about playing on the fire trucks as kids, when Tully’s dad and Willis’ grandfather served as members.

“Danny is great. He is an inspiration to the other guys,” Tully said. “Me and Danny, we’ve served together a long time. He’s always here for all the fundraisers and does a wonderful job supporting the department. It’s nice when you have Danny out on a call.”

Excelsior Hose Company members not only support each other, they support other area fire departments as well. Thanks to their speed and experience, Excelsior is a valuable friend to neighboring departments.

“We can be ready to go fast,” Willis said. “We are a rapid intervention team. If a firefighter goes down, we are the ones there to get him out.”

For instance, in Fleetville, a firefighter was trapped after a ceiling came down. Excelsior Hose Company was part of the rescue to get him out.

One day, it was Chief Tully who had a close call. As the house on fire quickly filled with black, thick smoke, Tully lost his sense of direction.

“I sat for a moment and thought I was going to die,” Tully said. “I couldn’t get out. I was running out of air and didn’t think I even had time to call anybody. Then, I looked up and saw some sunlight coming through a window. I started banging to let someone know I was there. All the hot smoke was coming up. I thought, ‘I’ve got one chance.’ I just dove right through that window headfirst. Then I felt my brother Jerry’s hands grab me and the guys ripped me out of there. It was just in time. I was completely out of air.”

Excelsior Hose Company has rescued more than just residents and fellow firefighters. They have rescued pets as well. One memorable fire involved an encounter with a snake.

“We encountered a pet python at a fire once,” Willis recalled. “One of our guys went crawling in and the python was looking him right in the face. It was big! He’d felt it wrapping around his legs first and thought it was our hose.”

The python survived and the firefighters of Excelsior Hose Company had another tale to tell.

The 130-year-old fire company has a proud history, and Willis is just the most recent in a long line of firefighters who have followed in their families’ footsteps and served decades.

Tully recently found his grandfather’s ladder and used it to craft a memorial. Using boots as flower planters on each step and an Excelsior helmet and alarm box on top, he honors those who have passed on.

“It’s my tribute to every firefighter’s walk to heaven,” Tully said.

Willis shrugs off any praise about his long service.

“I appreciate this award, but I didn’t stay in to get it or any recognition,” he said. “The camaraderie is the best part. It’s an honor, it really is. I enjoy it. I’ll stay in until I can’t do it any more.”

Because of the pandemic, they had to cancel their in-person event but hope the community will still support a virtual bucket brigade Saturday with a drawing on Facebook live. Tickets are being sold for the drawing with cash prizes up to $50,000. Contact the department for details or visit https://www.facebook.com/Excelsior-Hose-Company-1-Bucket-Brigade-of-Bucks-110288074093998