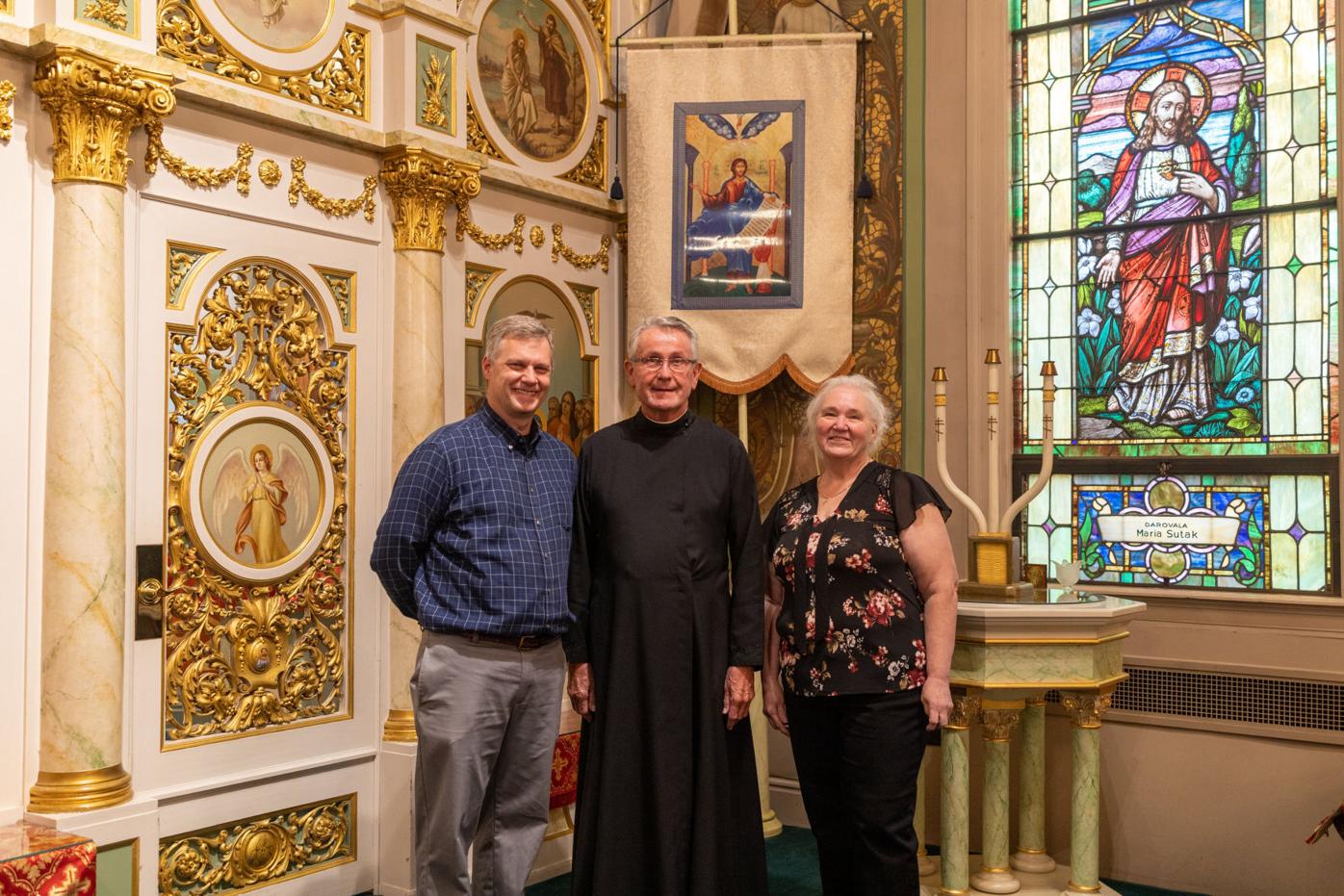 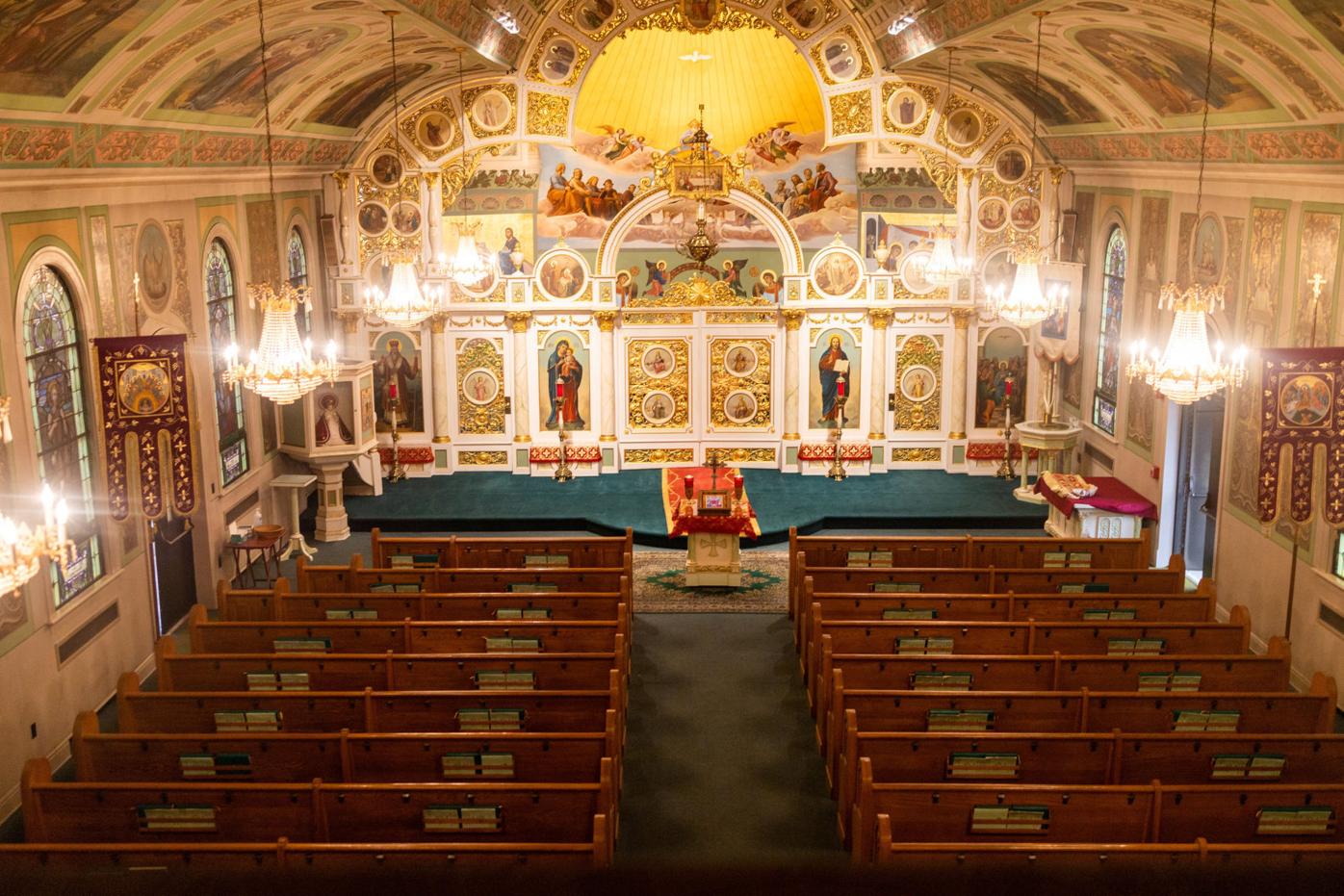 Parishioners of Holy Ghost Byzantine Catholic Church in Jessup are working to preserve their place of worship.

When the church needed repairs, members stepped up to get the job done. Through donations and fundraising efforts, churchgoers secured enough money for several much-needed projects.

In June of 2019, the renovation of the ventilation portion of the stained-glass windows that line the church began.

“The windows over time deteriorated,” said the Rev. John Cigan. “We had to restore the stained glass, which is also encompassed with lead.”

According to Cigan, living family members of the original donors donated money for the windows; other parishioners donated, too. Baut Studios Inc. in Swoyersville handled the refurbishing and instillation. Each window cost approximately $2,000; those who contributed to the project were acknowledged in the church’s bulletin.

When the windows were complete, the Rev. John Cigan and parishioners tackled their next project, the outside front of the church.

“What we thought would just be replacing the stone turned into a significant water problem and the whole front stair had to be reconstructed with new railings,” said Cigan.

That work is still in progress and there are plans to put in new lighting and address the sidewalk in front of the church. Parishioner and general contractor Marc Zini donated his time to the project and additional subcontractors were hired to complete the work.

For lifelong member Ric Covaleski of Peckville, watching everyone come together to preserve the church is something special.

“When you’re small and see (the church), it’s a big monolithic thing,” said Ric Covaleski. “When you get older, the reality sets in of how things actually work. There are folks who used to take care of these things, then they start deteriorating and you (realize) it’s up to us. It’s encouraging to see people stepping up to do it… It always looked great when I was little and now at 56 years old, it looks just as good as it ever has.”

The Greek Catholic Union Lodge 92, in partnership with the church, holds various fundraisers throughout the year. An ethnic food dinner is held prior to Easter and their annual stuffed chicken breast dinner is scheduled for Nov. 7.

Additionally, lodge members host a Christmas party, which is free for the community.

Parishioners step up and help the ensure that each fundraiser is a success.

“Parishioners will be there working and helping,” she said. “I know almost everybody… (these fundraisers) bring back such memories.”

Members enjoy the sense of belonging the church environment fosters, something Joyce Covaleski worked hard to keep up during the pandemic.

Joyce Covaleski, who serves as the director of religious education, wanted to ensure services reached people’s homes when they couldn’t gather in person, and pushed through the challenges of setting up a Facebook to live-stream Mass.

“We just wanted everyone to stay connected,” she said. “We never used the words that the church closed, because we didn’t.”

Joyce Covaleski also personally delivered religious material to CCD members last year and will be setting up a virtual classroom this year to ensure the children feel connected.

Parishioners also step up to help the community. Members collect toys for Catholic Social Services and hold a bake sale around the holidays. Food is also collected for the NEPA Bread Basket, and the church participates in the Souper Bowl of Caring each Super Bowl Sunday to collect cash and canned food for the food bank.

“I see community every week,” said Ric Covaleski. “The names may change, but that feeling of community always remains.”