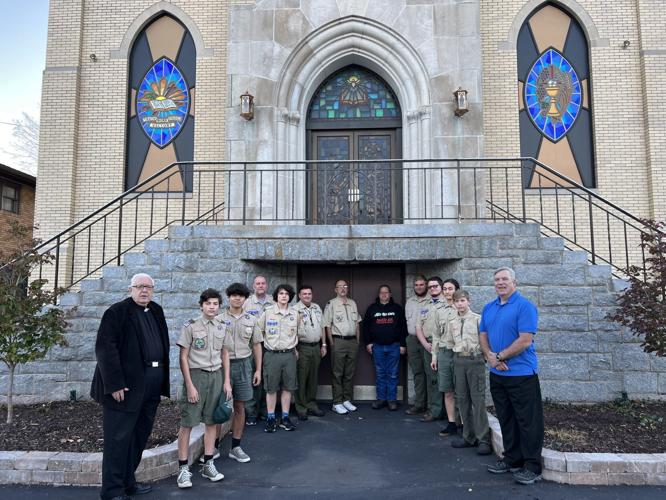 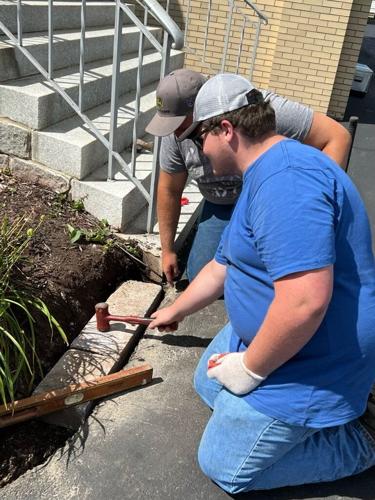 From left, Wayne Jones and Nick Youshock using a hammer to knock away an old planter liner at St. Adalbert’s Church.

From left, Wayne Jones and Nick Youshock using a hammer to knock away an old planter liner at St. Adalbert’s Church.

Pivoting from park benches to planters helped an Olyphant teen earn the highest rank within the Boy Scouts of America.

Nick Youshock, 18, organized and led a community service project to replace flower planters in front of St. Adalbert’s Church at 515 Mary St., Dickson City over the summer. The project was the final piece in his journey to earn his Eagle Scout rank. All together, Boy Scouts must earn 22 merit badges, lead a service project and then go before the Eagle Scout board of review.

“I can’t take credit for the idea,” Youshock said about the planter project. “I had originally planned to put some benches at a park, but there were some zoning issues and I was connected to … St. Adalbert’s to help out some members within the troop and organize the project.”

The church welcomed the help in fixing the old planters, said the Rev. William Chromey of St. Adalbert’s, adding that the project was a win for all parties involved.

“The church community was very happy to have the … scouts come down,” Chromey said. “It’s great having young volunteers coming in to help out our community here and they did a lot of work around the site while we supplied all of the materials, but they did the labor.”

Youshock and the other volunteers broke down the old cinder block liners with sledgehammers, replaced gravel and topsoil, added new liner and borders and planted new greenery.

With the help of six other volunteers including his father, Paul, the teen was able to get the project done in under two days this summer.

“I’m surprised we were able to get it all done in a weekend,” Youshock said. “We had to use a masonry saw, which my dad luckily knew how to use, along with contacting the … borough to take the old material away.”

Despite completing merit badge requirements, Youshock does not plan to stop his involvement with Troop 322. He will continue attending weekly meetings and participating in any way he can, including going on trips with other scouts.

“In spring of 2022, we took a trip as a troop to Washington D.C.,” Youshock said. “We stopped at all the landmark museums with the Smithsonian group at the National Archives, Declaration of Independence and some other memorial type things, which was awesome, and I’m looking forward to more of those opportunities.”

He hopes to remain with the troop through an adult leadership position while looking forward to participating in future volunteering opportunities with his new rank.

“I’ve been involved in the scouts since kindergarten and don’t plan to stop,” Youshock said. “I love all of the outdoor stuff we do like camping and getting outdoor skills, but volunteering to give back to the community like at St. Adalbert’s is a part of that.”

Youshock is currently a first-year student at Johnson College in Scranton, studying diesel truck technology. He hopes to one day open up his own truck dealership.

Troop 322’s Scout Master Frank Marcin said that only 4% of scouts ever achieve the rank of Eagle Scout nationally. Despite Eagle Scout projects bringing great community benefit, there is more to them than meets the eye.

“The real purpose is to demonstrate leadership because the scout leads the project, organizes, gets paperwork, planning,” Marcin said. “Nick is very active and is always there, which is always good with other scouts involved in other things like sports. He is one of the few and has been a very good scout over the years.”

With a decline in Boy Scout participation on a local and national scale, Marcin said requirements for merit badges make it difficult to retain scout numbers for extended periods.

“The requirement for an eagle increased to 22 merit badges with the citizenship in society badge just over the past couple of years,” Marcin said. “Twenty-one were required for as long as I’ve been involved, which is quite a while, which makes the road to Eagle even more intensive for those with other interests.”

Dickson City Troop 322 is always looking for new members and welcomes all interested to its weekly meetings in the Community Ambulance building at 2 Eagle Lane, Dickson City. The troop meets every Thursday from 7 to 8:30 p.m.