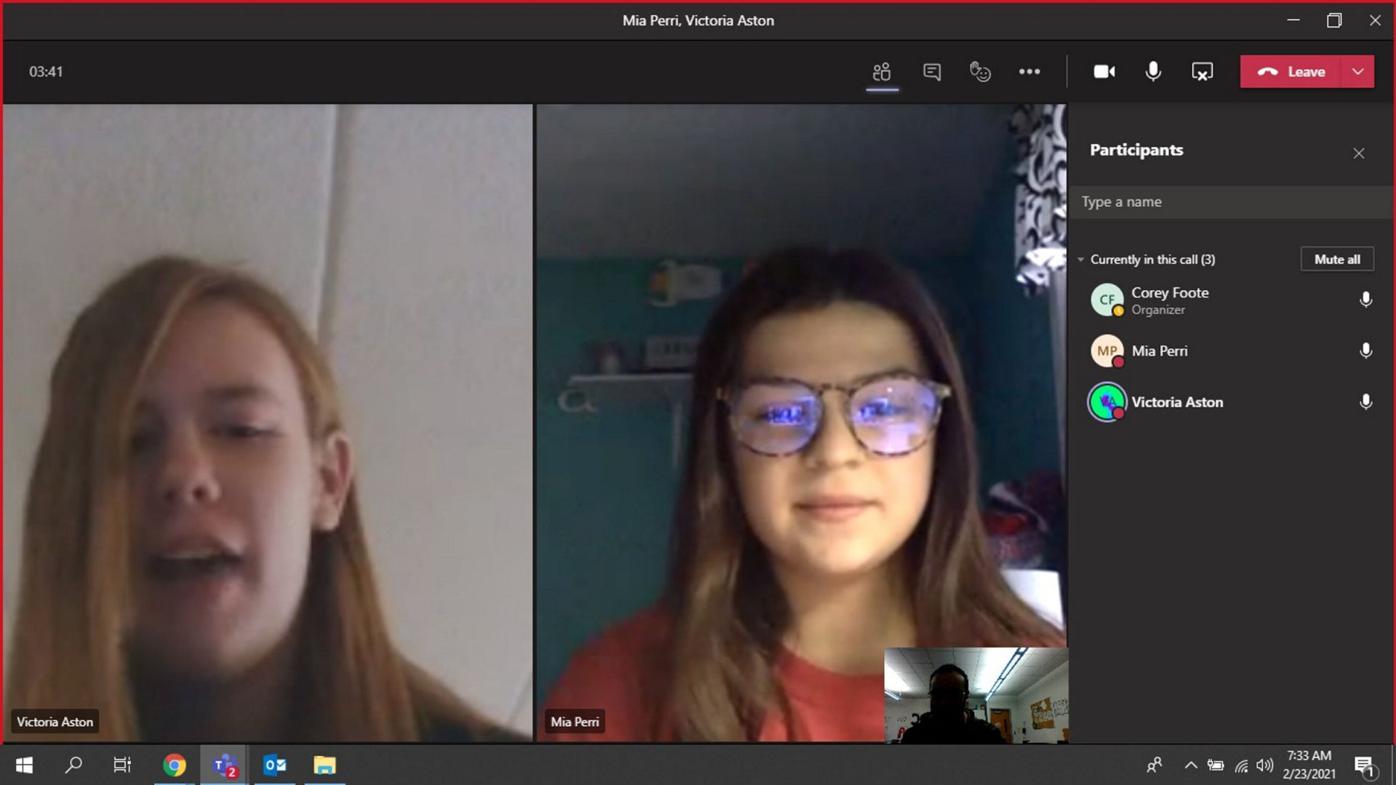 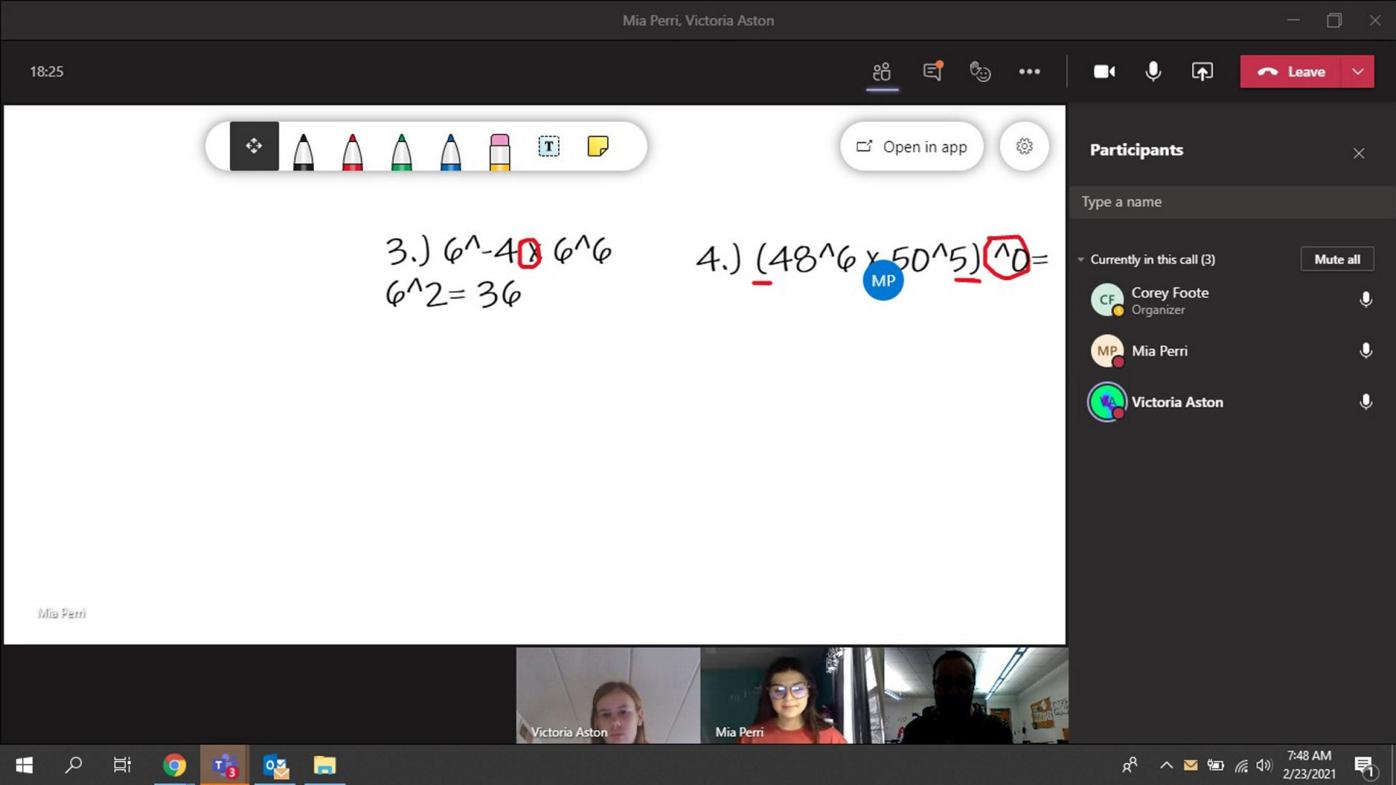 Eighth grader Victoria Aston and junior Mia Perry work on a math problem as part of a tutoring session.

Eighth grader Victoria Aston and junior Mia Perry work on a math problem as part of a tutoring session.

Corey Foote saw a need and created an opportunity.

In 2014, during his first year teaching math at Carbondale Area High School, Foote tutored students from his eighth grade algebra class a few times a week. As the years went on and the interest in tutors began to grow, Foote realized it wasn’t realistic for one person to keep up with all the work.

“There’s a lot of interest in tutors,” Foote said. “It’s impossible for one person to do.”

In 2019, he was approached by several upperclassmen who were looking for teaching experience and wanted to help. Foote agreed, and they began coming to his class to tutor other students.

Foote soon noticed how much the students benefited from the experience. Last spring, he decided to formally start a schoolwide tutoring program for junior high students in Honors Algebra 1, Pre-Algebra and Math 8. Thus, the Future Teachers Club began; Foote serves as advisor for the group.

“I always felt the kids needed a little bit of an extra push,” Foote said. “It’s nice because the younger kids can have older students to look up to and get help from.”

Eighth grader Victoria Ashton found the club to be extremely helpful to her in learning her algebra coursework.

“Algebra is not always easy for me,” Victoria said. “Sometimes I can’t do it alone.”

Mia Perri, a junior, doesn’t have plans to become a teacher but joined the club because she loves to help the younger students.

“I just like to help others,” Mia said. “It’s also a good experience to gain social skills like public speaking.”

With a formal program now established, Foote set up requirements for the club. Each tutor must be a member of the National Honor Society and maintain a B average in the subject they want to tutor. They also must tutor at least once a week to maintain active membership.

“They should be tutoring once a week,” Foote said. “If they don’t, then they aren’t recognized as an active member.”

Before the upheaval that came with COVID-19, the club met on Tuesdays and Thursdays before school. Tutors would help the seventh and eighth graders from 7:15 a.m. until the bell rang for first period.

“I got the idea to do the tutoring in the morning,” Foote said. “I felt that would work really, really, well.”

The program was running smoothly with 10 tutors helping 15 to 20 kids every day, until COVID-19 struck. The club came to a halt until this fall, when the school year started back up again.

“The transition to all virtual was so new, and the kids didn’t have the technology,” Foote said. “We didn’t do anything through the rest of last school year, but this year we started back up when school began.”

The club continues to meet virtually on Tuesdays and Thursdays from 7:30 to 8:20 a.m. However, the change has brought additional challenges, including technological issues.

“Virtual is not as easy as I thought,” Victoria said. “Sometimes my Chromebook wouldn’t work properly, and my WiFi would cut out.”

Mia added, “It was interesting to say the least. We’ve gotten used to it, and we have a good system going, but it’s definitely very different.”

Foote said the club had to get creative in a virtual classroom and noted the students now take pictures of their work for the tutors to check. He said the method isn’t optimal since the tutors used to move around the classroom and help multiple students, but they are making the best of the situation.

“It’s more effective in person, but we’ve made the best we can,” Foote said. “We’ve made it work, and the kids that do choose to get tutored are getting a lot out of it.”